It’s the end of Great British Pea Week, and what better time to celebrate my love for the humble garden pea! Starting life as a shrivelled up wrinkly seed, the first luscious green leaves that emerge are a welcome sight in early spring. Once they start growing, they don’t need much encouragement as they soon start to romp away, climbing my natural hazel trellis support with their adorable curly tendrils.
END_OF_DOCUMENT_TOKEN_TO_BE_REPLACED

Well, what can I say? It’s been an amazing year for the squash! In fact, it’s actually my first successful attempt at growing squash and now I’m overrun with them!  END_OF_DOCUMENT_TOKEN_TO_BE_REPLACED

You might remember how excited I was to find my first squashes including some tiny butternut squashes forming last month. Well, it seems 2017 is going to be the year of the squash! I keep seeing more and more pop up beneath the jungle of leaves. I counted..wait for it…
END_OF_DOCUMENT_TOKEN_TO_BE_REPLACED

The peas were done for as are my shears by the look of them! Rather than pulling them out, I chopped them at ground level for the roots to slowly nourish the soil with nitrogen.

In its place I tied in the squashes and pumpkins that have been growing beneath the pea supports for a month or two. These are the plants that I didn’t have room for in the main pumpkin patch (which is going crazy by the way). The squashes will grow vertically up the frame, saving space and it should also help prevent mildew and pest damage. It seems to be working well for the cucumbers this year!

I also weeded in between the two supports and threw in some beetroot seeds. It’s probably too late now, but what the hey.

I’ve never had a great deal of luck when it comes to growing pumpkins and squashes and I’m yet to harvest a single butternut squash, despite growing it every year. Although, I do harvest a few pumpkins each year but not many. This year however, looks to be a monster year for the squash family!

Now that the squashes are forming I’ve started to feed them once a week. I didn’t bother coving the ground with a weed suppressant membrane like some allotment people do. Instead, I’ve let the plants freely scramble across the ground to suppress the weeds. It’s amazing how fast they grow once they get going! I also threw in some chard plants for the sake of covering a bit more ground with a crop. I can’t wait to try spaghetti squash for the first time! I have so many of them growing too, so I hope they store well. 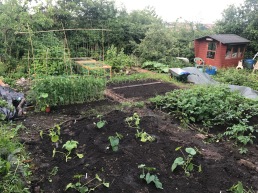 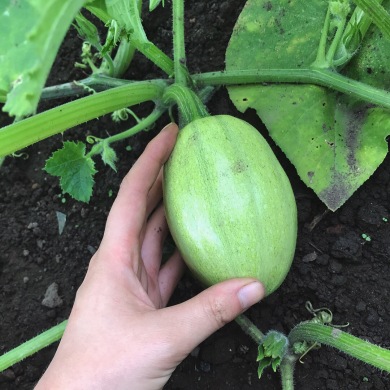 The potatoes aren’t meant to be ready for another 2 weeks but I just couldn’t resist. I took a potion home, rubbed off their muddy, soft skins and gently steamed them until soft. After gentle slice to cut them open I stirred through a dash of butter and sprinkled with fresh mint. I didn’t sit down, leave the kitchen or even transfer them from the pan to eat them. Nothing beats the fresh taste of your own grown potatoes. They didn’t even touch the sides.

I’m so relieved to finally get the potatoes in the ground! It was a really nice day to do it and even though we had quite a sharp frost last night the ground was soft enough to dig. More cold nights are forecasted so I’ll need to get hold of some garden fleece in the week to protect the potato bed from frost damage.   END_OF_DOCUMENT_TOKEN_TO_BE_REPLACED 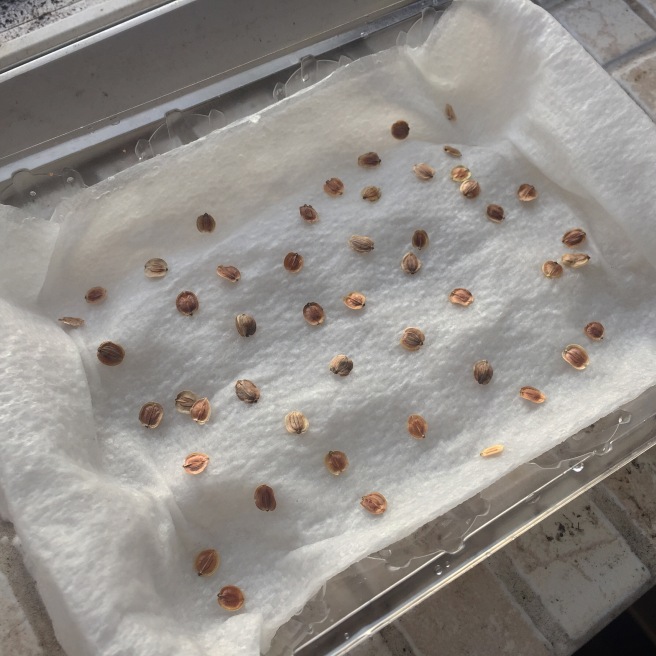 It’s a bit of an experiment but I started to chit my parsnip seeds last week since they take a long time to germinate. It’s been almost a week now and they’re no signs of them showing any signs of life yet!

I have two large half drums from a water butt to use for growing my carrot and parsnips this year so we’ll see how that goes! I had limited success with them last year as I started too late and didn’t prepare the soil well enough. By growing in big containers I plan to sieve all the compost and add a load of sand to give it the right conditions it needs to hopefully give me some Gladiator parsnips!

Preparation
The potatoes are chitting away nicely and while they develop knobbly, vivid shoots I’m frantically clearing and digging what will be their enormous bed to grow in. The bed is about 6m x 3.5m which is at least four times the size of what I grew my spuds in last year. The lack of space was probably the reason my Maris Pipers weren’t very big, but the Charlottes were brilliant and so delicious that I’m definitely growing these again.
END_OF_DOCUMENT_TOKEN_TO_BE_REPLACED